Sake House Miro is an awesome little neighborhood sushi joint just a 15 minute walk from Chez Jones that we probably visit every month or two.  It’s not the greatest sushi we’ve ever had but it’s really good sushi with super reasonable prices, $5 pitchers of Sapporo (!), and great service.

Our three favorite dishes are the “Sashimi Ceviche” which I hope to someday reproduce on this blog for you, the yellowtail sashimi which I will never be able to duplicate at home, and their shishito peppers.

Oh, and the $5 pitchers of Sapporo.  Four favorite dishes.

If you’ve never had shishitos, they’re small green chilies, 19 out of 20 of which are mild and delicious, the other one of which is crazy spicy.  The sense of danger only adds to the appeal.  Our little sushi joint serves them blistered with a sprinkle of bonito flakes that wriggle and dance like they’re alive.  If I’m being totally candid, the wriggling was a little disconcerting the first time we ordered it but I now understand that they’re not actually alive and are, in fact, a critical part of what makes this dish awesome.

The fact that I included the bonito flakes in this recipe should tell you how awesome they are.  They’re not just garnish.  Normally, I try to accommodate lots of dietary choices:  if a recipe is just a tablespoon of canola oil away from being paleo, I’ll test it with olive oil; if it’s a pint of chicken broth away from being vegetarian, I’ll make sure it tastes just as good with vegetable broth.  I really, really wanted to make this vegan and gluten-free – it’s just a pan of sauteed peppers, for crying out loud.  But Brad and I had a few bites and realized that it really truly needed the soy sauce and bonito flakes to achieve its full awesomeness. Of course you can leave either or both out and the peppers will still be good.  The full experience, though, is great.  And that’s what we’re selling here.

You can find shishito peppers and bonito flakes at most Asian markets.  Buy bundles of individually packaged smaller bags of bonito

since they don’t last once they’ve been opened.  Test a pepper when you think they’re done.  If there’s any bitterness at all, they need to cook longer.

We serve these as an appetizer, communal side dish, or yummy snack. 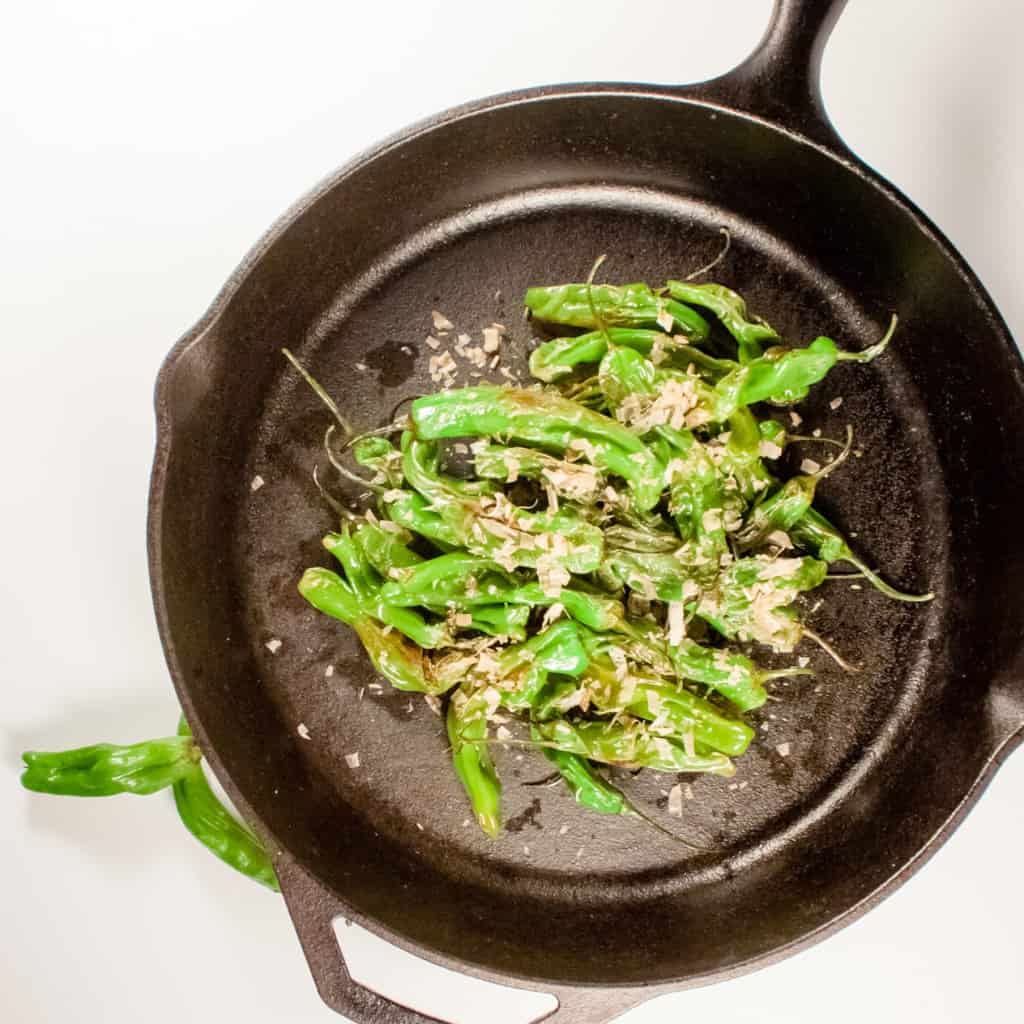 Heat oil in a large saucepan over medium-high heat.

Add shishito peppers and cook, turning frequently, until limp, blistered and no longer bitter, about 10 minutes. Remove from heat.