Last year I had the most amazing carrot ginger soup at a little French bakery in Seattle.  I was sick and nothing sounded very appetizing except soup. Just a few sips of the creamy, sweet, faintly spicy soup and I started feeling better.

I’m sure that soup was laden with butter and cream so I started experimenting with healthified versions.  A year of experiments later and this recipe from Gina at Skinny Taste is the official winner. As creamy and comforting as the French original for a fraction of the calories, it’s a great soup to have on hand with more cold weather – not to mention flu season – on the horizon.

Paleo and gluten-free, this soup can easily be made vegan by using tofutti sour cream or leaving it out completely. 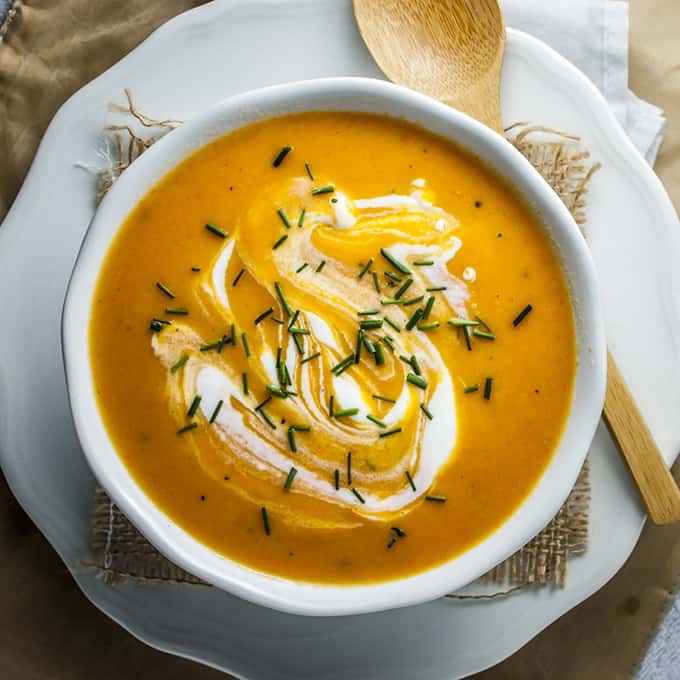 Melt butter in a large, heavy pot over medium heat. Add onions and cook, stirring, until soft, about 5-6 minutes. Add broth, carrots and ginger and bring to a boil. Cover, reduce heat to medium low, and simmer until carrots are soft, about 30 minutes.

Puree with an immersion blender or carefully in batches using a standard blender. Stir in sour cream, season to taste, and serve garnished with fresh chives.