French Onion Soup is traditionally made with beef broth – a fact that drove me crazy while growing up vegetarian.  This recipe captures all the intense flavor of the original using vegetable broth.

The technique is taken from Cook’s Illustrated and is absolutely perfect. While it still takes several hours to perfectly caramelize the onions, beginning in the oven reduces the number of deglazing cycles and active time.  The extra time is utterly worth it.  The final result is a rich, sweet, and intensely flavorful broth.  Like, crazy flavorful. Like, as much as you might want to, you won’t be able to eat more than a bowl in a sitting or your tastebuds will explode.

After much research, I bought these adorable onion soup crocks on Amazon and couldn’t be happier.  They’re the perfect size to hold an entree serving of soup, stand up to the broiler, and are dishwasher safe.

You’ll start with a pot filled to the brim with raw onions but they’ll reduce significantly as they caramelize.  Be sure to use yellow onions – white or sweet onions would make the already sweet soup cloying.

I replaced the Emmental with a low fat Swiss to cut back on the calories but this soup is so rich and savory on it’s own that it really doesn’t need the cheese or crouton.  Leave off the cheese and swap out olive oil for the butter to make this vegan.  Or skip the crouton for a hearty gluten-free, paleo-friendly meal.

This soup tastes even better a day or two after cooking making it an ideal make-ahead dish. 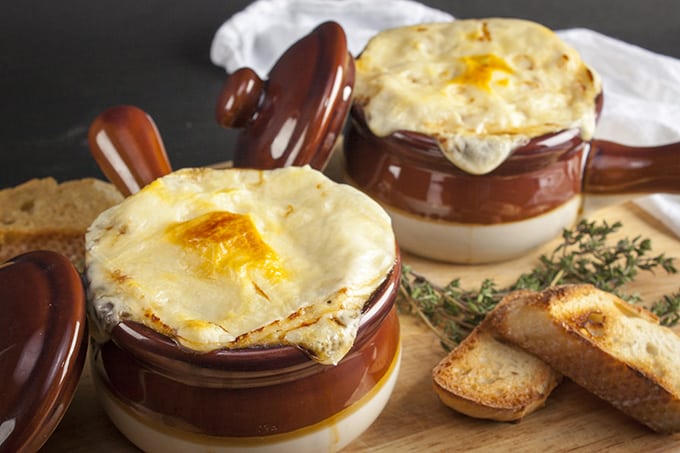 Coat the inside of a large Dutch oven or heavy bottomed pot with non-stick spray. Add butter, onions, and 1 tsp salt and cook, covered, for 1 hour.

Remove the pot from the oven, stir the onions, and cook, mostly covered but with the lid slightly ajar, another hour.

Stir again, scraping the sides of the pot, and continue cooking another 30-45 minutes until the onions are very soft and golden brown.

Move the Dutch oven to the stovetop and set on medium-high heat. Cook, uncovered and stirring regularly, until the liquid evaporates, the onions turn a darker brown, and a dark crust begins to form on the bottom of the pot, about 20-25 minutes.

Deglaze with 1/4 cup water. Scrape the bottom of the pot to remove the fond.

Continue cooking until another dark crust has formed. Continue to deglaze with water 3 more times until the onions are very dark brown.

Deglaze a final time with the sherry and cook, stirring, until the liquid evaporates, about 5 more minutes.

Add 2 cups water, the broth, thyme, bay leaf, and additional 1/2 tsp salt. Increase heat to high and bring to a simmer, scraping any remaining fond from the bottom and sides of the pot.

Reduce heat to low and simmer, covered, another 30 minutes.

Remove the thyme and bay leaf and adjust seasoning to taste.

Meanwhile, toast the baguette slices in a toaster oven or 400 degree oven.

When ready to serve, top a bowl of soup with two croutons, sprinkle with an ounce of cheese, and place under the broiler until the cheese is melted and beginning to brown, about 5 minutes.